Bute House in Charlotte Square in Edinburgh’s New Town serves as the First Minister’s official residence while working in the capital, including during the Parliamentary week.

The Office of the First Minister features the distinctive Georgian doorway of Bute House.

The category A-listed building sits on the north side of the grand square created in the late 18th century as part of James Craig’s First New Town plan unveiled in 1767. It would be more than two decades before neoclassical architect Robert Adam was commissioned in 1791 to design unified frontages for Charlotte Square. 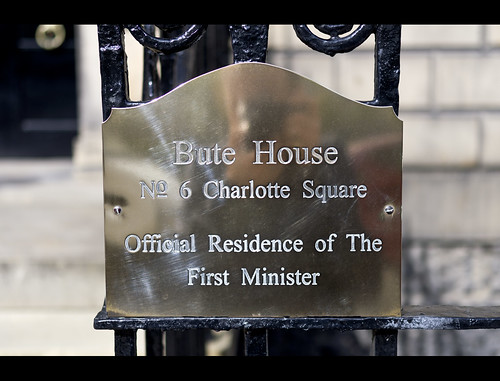 A report from the Simon Wiesenthal Center, published in 2008, raised questions about the origin of the decorative chandelier that hangs in the Bute House drawing room.

The current origin of the chandelier is believed to be based on a written account that had been held by the Bute family and displayed in the drawing room along with the chandelier.

This describes how interior decorator Felix Harbord, while serving in the military during WWII, recovered the damaged chandelier from Germany in 1945 after finding it “abandoned in the streets of Cleves”. He delivered it to Lady Bute, who arranged for its repair and installation at Bute House.

Following the emergence of the Wiesenthal Centre report, the National Trust for Scotland undertook a preliminary investigation within its archives of the provenance of the chandelier and could find no conclusive evidence that the chandelier had been looted from Germany.

The National Trust for Scotland said:

“Unfortunately, back in the 1960s, when Bute House and its fixtures and fittings were acquired by the Treasury, it was not common for the detailed histories of objects to be investigated.  They would simply be acquired, catalogued and put on display.

“Nowadays there is a much more rigorous approach and all museums and galleries in the UK are particularly mindful of the issues surrounding items acquired in the 1930s and 1940s.

“With this particular chandelier, all we have to go on is the written account passed on by the Marquess of Bute’s estate.  The scenario painted by the Simon Wiesenthal Center is concerning but we still have no conclusive evidence to confirm that the chandelier was indeed looted.

“Nevertheless, as responsible custodians, we will lodge details of the chandelier on the central spoliation database.  This contains a list of artefacts held in the UK of uncertain provenance and enables anyone who may have further information to come forward.“

Following this confirmation from the National Trust, the Scottish Government set out its position on stolen artwork from WWII. A government spokesman said:

“The Scottish Government deplores the illegal looting of artwork that took place during World War II and other conflicts and is supportive of global efforts to increase awareness of the problem and establish the rightful provenance of items that may have been stolen. We support the aims of the UK-wide National Museum Directors’ Council (NMDC), which has set out a statement of principles and actions for member organisations on the spoliation of works of art during the Holocaust and WWII.

“Following the claims made in the Simon Wiesenthal Centre report about the Bute House drawing room chandelier, the National Trust has established that it has no further information in its archives about the chandelier’s provenance beyond the information already made public.  We will now establish whether there are any further sources of information that may offer further insight into the chandelier.

“In line with the recommendations of the NMDC, we will make public any further information that comes to light and we will also take immediate steps to update all relevant published information on the chandelier.

“We welcome the decision by the National Trust to place the chandelier on the spoliation database. This database already includes details of artworks held in museums and galleries in Scotland from this period where detailed investigation has yet to establish provenance and is an important tool in establishing the facts around stolen artwork from this period.”