First Minister Nicola Sturgeon and her Cabinet regularly hold Cabinet meetings in towns across Scotland. They visited West Dunbartonshire this week where they held a public discussion in Clydebank Town Hall after visiting local businesses and community groups throughout the day.

Deputy First Minister John Swinney joined the First Minister at Glenhead Engineering where they launched the national manufacturing action plan which will be supported by £70 million of investment. DFM and FM were joined by children from three local primary schools, and FM gave Anna from Golden Hill PS a spelling challenge!

Culture Secretary Fiona Hyslop was inspired by West Dunbartonshire Youth Arts Hub – a service for young people, which is led by young people.

DFM John Swinney viewed the Queens Quay regeneration, where the DFM got a tour of Clydebank’s famous Titan Crane

Stunning view toward #Glasgow from the top of the Titan crane #Clydebank. https://t.co/z7X9Om0xP5 pic.twitter.com/r8MMj2Y1XA 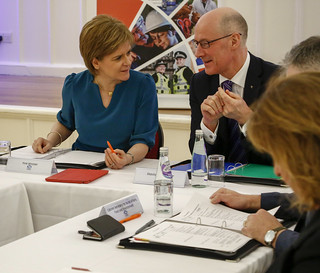 The Cabinet took excellent questions from the public, which they answered on the spot. Public discussions allow Ministers to answer questions about local and national politics directly – Zia is starting his engagement in political debate early!

Zia's parents brought him to the public discussion at Clydebank on February 15, making him the youngest participant of the evening! #WDCab

You can watch the public discussion here.