Home » News » Waves of new jobs for the Highlands

Waves of new jobs for the Highlands

The First Minister visited the Highlands to see how investment of up to £200m will support hundreds of jobs in the rural economy.

She visited Ross-Shire Engineering in Muir of Ord, who announced they will use the funding to create new jobs and secure existing positions.

The company has secured potential funding of up to £200m across the next five years from Scottish Water to supply equipment to ensure high quality drinking water in many parts of Scotland. 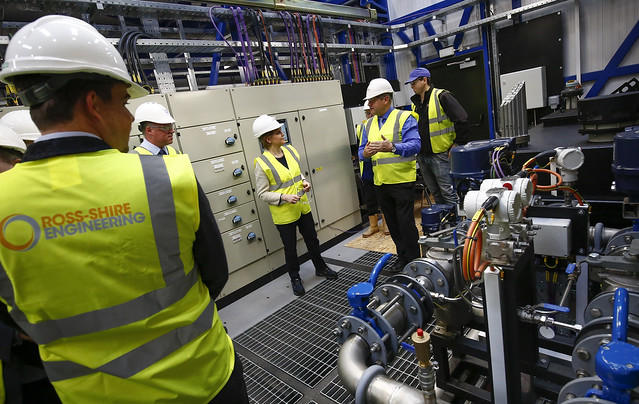 This investment has already resulted in over 100 new jobs this year alone and provided additional job security to the existing 273 staff. The company has also expanded its apprenticeship programme, and will more than double the number of vacancies for apprentices and graduates over the next five years.

Ensuring a strong rural economy is crucial to Scotland’s success.

This funding Ross-Shire Engineering has secured provides a hugely welcome boost in providing skilled jobs and investment across the Highlands, as well as providing vital utility services to Scotland’s homes and businesses.

“In particular, I am delighted they will be investing in their already strong apprenticeship job programme, providing vital training and employment to young people living in the Highlands in a competitive jobs market.

Last week when I set out my Programme for Government I promised to protect Scotland’s interests, particularly our economic interests, in the wake of the EU referendum.

Driving sustainable economic growth is at the heart of that, and I am committed to ensuring this Government does all it can to ensure Scotland’s rural economy remains prosperous for future generations.”

The announcement came as the First Minister made a series of visits in the Highlands to see how innovation and investment is strengthening Scotland’s rural economy.

Scotland will be home to the world’s first ever large-scale tidal stream farm as part of a drive to develop Scotland’s marine renewables industry, creating jobs and investment.

The first phase of the project, developed thanks to £23m Scottish Government funding, is expected to further develop the marine renewables industry and open up vital skilled job opportunities for those who are moving from the oil and gas sector.

Delight to be with FM @ #NiggEnergyPark to celebrate start of 6MW Phase 1A of Atlantis' #MayGen tidal energy project pic.twitter.com/CgfBcx4GeB

During her visit, the First Minister said:

I am incredibly proud of Scotland’s role in leading the way in tackling climate change and investment in marine renewables is a hugely important part of this.

“MeyGen is set to invigorate the marine renewables industry in Scotland and provide vital jobs for a skilled workforce, retaining valuable offshore expertise here in Scotland that would otherwise be lost overseas. Highly skilled operation and maintenance jobs will also need to be carried out locally, providing strong local employment opportunity for rural areas.

There is no doubt that the eyes of the world are on this project which is why the Scottish Government’s investment is so crucially important.

But it is also absolutely vital that the UK Government sticks to its word in honouring the commitment they made to their subsidy programme and tackle the current uncertainty that exists before they cause irreparable damage to the long term prospects for the sector.”