A speech on the economy at University College London

The First Minister travelled to London to make a major speech on the economy at University College London.

Speaking to an audience that included students, professors and business leaders, the First Minister set out an alternative plan to tackle the economic deficit, by putting fairness at the heart of economic growth, increasing investment and maximizing the skills of Scotland’s population.

The First Minister spoke about the human cost of austerity as she highlighted how successful economic policies such as gender equality and the living wage “have a sense of fairness at their heart” and help grow the economy by ensuring that Scotland maximizes the skill and innovation of all its people. 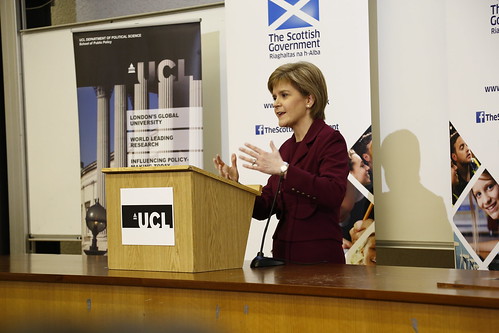 The event was oversubscribed and the lecture theatre completely packed. Following the speech, the First Minister took part in a Q&A with the audience. It was fantastic to see that the audience were so engaged and the Q&A covered a wide range of topics.

The day in London got off to an early start with a visit to New Broadcasting House and the Radio 4 studio for a live interview with John Humphrys and Justin Webb on the Today Programme. The tour of NBH continued, with a move to a nearby studio for an interview down the line to Glasgow for Good Morning Scotland.

Next stop was the Millbank Studios, close to Westminster for television interviews. There are many different broadcasters and crews based at Millbank, from the BBC to the Australian Broadcasting Corporation. The view from the balcony at Millbank will be familiar to many who watch BBC news – with the Houses of Parliament in the background. 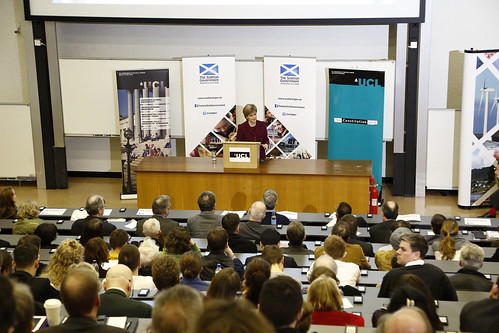 The economy is at the heart of everything we do. When the Deputy First Minister set out the budget for next year, he made it clear that it was an opportunity for the Scottish Parliament to deliver on the aspirations for a more prosperous and fairer country, with fairness and equity at the centre.

The First Minister is pictured with Jon Snow of Channel 4 news, below

This theme continued in the First Minister’s speech at UCL. We will use the powers we have in the Scottish Parliament to pursue a different approach to the economy; one based on partnership, fairness and prosperity.