The ‘Programme for Government’ sets out what the Scottish Government plans to do over the next year.

The First Minister set out her plans to Parliament on November 27, 2014.

All of the Bills and policies are focused on creating a Scotland that not only has a thriving economy but also helps to create a fairer society.

But the biggest investment we can make in Scotland’s future is in our people – so the plans also include ways that everyone can get involved and work together to make Scotland a better place.

To find out what can be achieved when a community comes together, the First Minister went to see The Kabin community centre in Loanhead, Edinburgh. 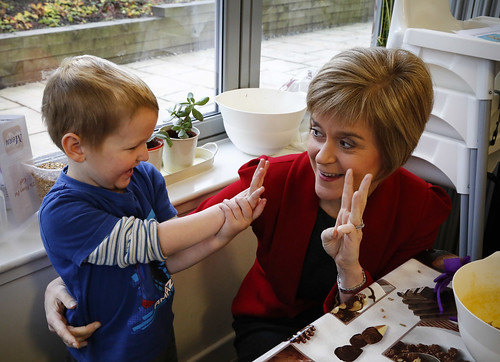 Over 1,500 people and around 20 organisations use The Kabin to work together to support the local community.

With a café, organic garden, music studio, laundry, cinema and soft play area, The Kabin is a busy hub for everyone in the area.

The First Minister then announced the Scottish Government’s plans for the next year.

The First Minister confirmed that an extra £10 million would be invested in a new ‘Empowering Communities Fund’ to make sure people can be more involved in the decisions that affect their lives.

Now more communities will be able to come together just like The Kabin!

The funding could go to a wide range of community-led initiatives like helping people find jobs, improving local facilities, encouraging more people to take up volunteering and promoting healthy eating.

A good example is the Gargunnock Community Trust who received nearly £90,000 in 2013 to regenerate and revitalise a local hall.

Douglas Johnston, one of its directors, said: “By giving residents control over their community centre we have been able to expand and make the building more flexible and sustainable.

“We are a small village with only 350 houses but regenerating the centre has brought the whole community together and helped the local economy.

“We now have everyone from mothers and toddlers to pensioners using the hall.”

Communities would also benefit from plans to introduce a radical package of land reform.

Land reform aims to help more people in rural and urban Scotland to have a stake in the ownership and running of land.

The plans include removing tax breaks for shooting estates which will help expand the Land Fund to £10 million a year.

Many Scottish communities have seen the benefits from community buyouts including StòrasUibhist.

Stòras Uibhist has been in community ownership since 2006, when the local community purchased 93,000 acres for £4.5 million – most of the funding came from The Big Lottery Fund and Highlands and Islands Enterprise.

Today the estate is estimated to be worth £34 million.

At the time of the buyout it was operated as a sporting estate for the enjoyment of the private owners but since then the company has significantly changed its focus to being a crofting estate operated for the benefit of the 1,000 croft tenancies.

Our plans are also focused on helping businesses as well as employees.

Businesses will be encouraged to invest in young people, pay the Living Wage and work with the enterprise agencies, local recruitment agencies and job centres to help the economy and their communities through the introduction of a new Scottish Business Pledge.

Those businesses signing up to the Pledge will receive Scottish Government backing which will be tailored to the company’s individual needs. This could include help with training, advice on accessing finance or support to enter into new markets.

Amanda Frazer owns the Larick House B&B in Newtonmore, one of more than 96,000 businesses across Scotland to benefit from the rates scheme.

Amanda said: “Signing up to the Small Business Bonus Scheme has given my business a huge boost of 100 per cent rates relief and this year alone I have saved £800.70”.

A fair pay for a fair days work

Boosting the economy is also about creating a fairer society.

More organisations will receive help and support to become Living Wage employers when funding is doubled for the Poverty Alliance’s scheme.

Over the last year the Living Wage Accreditation Initiative has been encouraging companies to sign up to the scheme.

Standard Life is committed to paying the Living Wage to their employees such as Dylan Smith, 18, a customer services rep with the company.

Here he talks about his experiences:

£30 million boost to Help to Buy

More than 3,700 people have already received financial help to own their own homes through the Help to Buy (Scotland) scheme.

The scheme is not only giving buyers the opportunity to get their new-build home but it is also supporting the housing industry and boosting the economy.

WB Properties has been building properties in Shotts for the last six years and is one of a number of small to medium sized developers to sell houses through the scheme.

Builder William Brown, 52, said: “Help to Buy has been a great scheme for a smaller developer like me. It’s been fantastic for both the industry and for people who are looking to own their own properties.”

To date many of the purchases through the scheme have been from larger builders with SME developers seeing a smaller share of sales.

While this parliament doesn’t yet have the power to legislate for gender quotas, we want to introduce a voluntary pledge to challenge all private, public and third sector bodies to achieve gender balance on their boards by 2020.

Bonnie Clarke is Director of one of the UK’s leading recruitment agencies, Badenoch & Clark, and works with a number of groups in a non-executive role.

Bonnie explains why she supports a 50/50 quota on boards:

Lots of other plans!

As well as those you have heard about, the First Minister has a lot of other plans for her first year of Government, including: