Home » News » Boosting the economy » One year on

The track was central to the athletic events during the Games, with the world’s fastest man Usain Bolt winning a gold medal in its lane 8.  Perhaps a future Usain Bolt was there today! 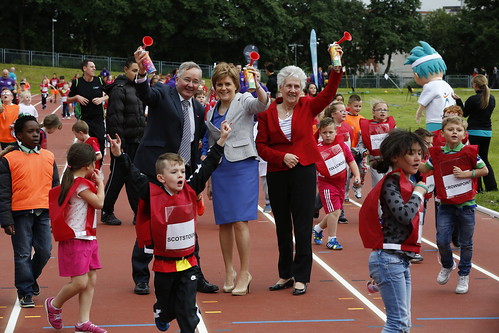 Glasgow 2014 XX Commonwealth Games were widely regarded as the best Games in their history – a chance for Glasgow and Scotland to show the world the very best that we have to offer.

The 2014 Commonwealth Games was an unforgettable event and a resounding sporting success. The stars of tomorrow now have the opportunity to be inspired and involved in the legacy of the most successful Commonwealth Games.

It’s great to see the world-class Hampden track in place here in the East End of Glasgow, and to know too that beyond the host city, children and adults in communities across Scotland are also benefiting from the Games with sports equipment, new facilities, and all the opportunities the Games have brought.

Today is also great tribute to all those who have made and continue to make the legacy of the Games a reality. It’s been an excellent example of partnership working with local and national organisations and the public, private and third sectors, and all of Scotland’s local authorities playing their part.”