She undertook a number of business engagements in the city as the visit to North America will strengthen trade links between Scotland and the USA and Canada. There are 550 US owned enterprises in Scotland, employing more than 106,000 people and have a combined turnover of £30.25 billion.

She met Conway Inc and announced that Scotland has been successful in its bid to host the 2022 World Forum for Foreign Direct Investment, which will attract 400 site selection agents to Scotland.

@ScotGovFM announces that Scotland has been successful in its bid to host the 2022 World Forum for Foreign Direct Investment https://t.co/LbUDpSSSbv@ConwayGlobal @WorldForumFDI @visitscotland #ScotlandIsNow #FDI

Scotland’s performance on FDI is exceptionally strong, and an indicator of the talent, skills and ingenuity in our economy. Most recent figures show that our increased support for digital, FinTech, Business Services, and manufacturing investment have seen FDI in digital and manufacturing projects jump 56% and 25% respectively from 2016 to 2017. Hosting the 2022 World Forum for FDI will allow us to build on that momentum, firmly positioning Scotland on the global stage.”

She then attended a Scotland Is Now investor lunch, hosted by IBM, where she addressed an audience of around 50 senior business people about Scotland’s strengths and assets as an investment location and trading partner.

She discussed current and future collaborative projects at Morgan Stanley’s Centre of Excellence in Scotland. The company employs 1,550 people in Scotland and is a key part of the Scotland’s financial services industry.

FM @NicolaSturgeon visited @MorganStanley in New York to discuss current and future collaborative projects at their Centre of Excellence in Scotland. pic.twitter.com/ybkRKQfadi

The First Minister was also appointed the inaugural #HeForShe Global Advocate by UN Women, with the Scottish Government becoming signatories to the UN Women’s global solidarity movement for gender equality which engages men and boys as advocates for equality.

? Today, the First Minister was appointed the inaugural Global Advocate for the #HeForShe campaign and discussed Scotland's steps towards gender equality with @UN_Women Executive Director @phumzileunwomen.

She then took part in a roundtable discussion with UN Assistant Secretary-General for Human Rights Andrew Gilmour at the UN in New York. 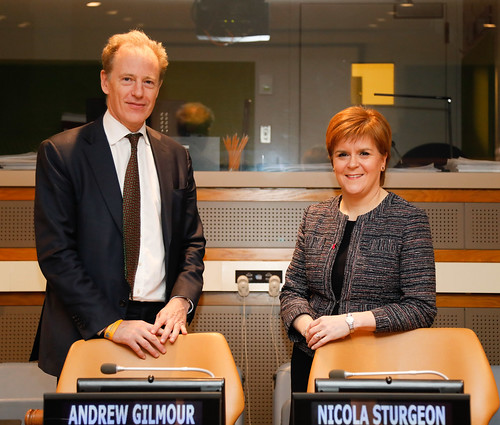 The First Minister will travel to Canada on the fourth day of the North American trip where she will officially open the Scottish Government’s office in Ottawa.