First Minister Nicola Sturgeon spoke to 150 business and public sector leaders at the National Economic Forum in Edinburgh about the impact of Brexit on Scottish businesses. 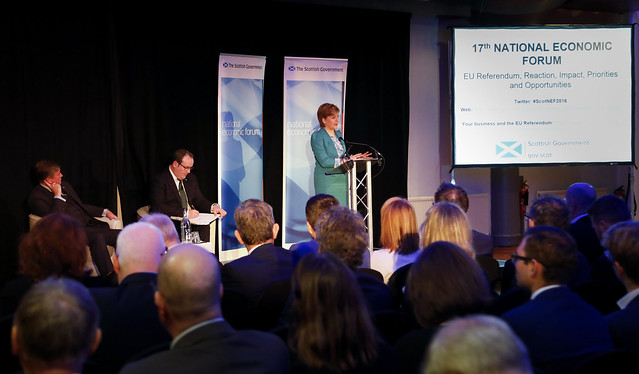 She called on businesses to support an all-Scotland coalition to protect the country’s place in the European Single Market.

Regardless of the positions people take on the constitutional future of Scotland, on this central issue of Single Market membership, I think there is widespread agreement. In fact, rarely has there been such unity on an issue.”

“I think there is a real opportunity to present to the UK Government a unified Scottish position: an all-Scotland coalition of support for the Single Market.

“An all-Scotland coalition – of politicians, business, universities and a whole range of others – to resist a hard Brexit.”

"Work with us to ensure that our commitment to the Single Market is heard and understood" – @NicolaSturgeon speaking at #ScotNEF2016 pic.twitter.com/tZlCyuMLYY