Focus on the economy

After becoming First Minister, Nicola used her first major speech to speak to businesses. More than 70 representatives from Scotland’s business community joined her at Scottish and Southern Energy in Glasgow to hear about plans to boost the economy.

During the address the First Minister announced that the government would continue to take advice from the Council of Economic Advisers (CEA).

The CEA is a meeting of experts – such as Nobel Laureate Professor Joseph Stiglitz – who discuss the best way to improve the Scottish economy. 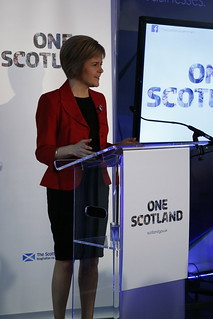 The CEA will look at how we use existing powers to make our economy more competitive.

The CEA will also look at how we make sure that plans to boost the economy also help tackle inequality.

To do that the First Minister asked Sir Harry Burns to join the council.

Scottish and Southern Energy were also able to let the First Minister know that they had plans to pay all of their staff who work on the Caithness-Moray subsea cable the Living Wage.

This is exactly the kind of economy we want to build: one where the benefits of growth are shared widely and fairly.

The First Minister was also keen for business to share their ideas on growing the economy.

If you have any idea you want to share with us then get in touch through this website! 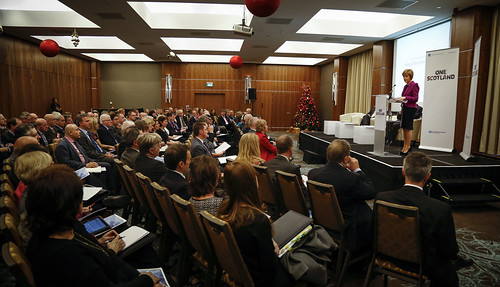 She told delegates that the new Scottish Business Pledge will lead to a more competitive economy and a fairer society.

You can find out more about the business pledge here.

Nine Scottish Government ministers, including the First Minister and Deputy First Minister, took part in the event, chairing breakout sessions to hear as many views as possible.

As well as Scottish and Southern Energy, more businesses are seeing the benefits paying their staff a fair days pay for a fair days work.

The First Minister was recently able to meet Scotland’s 100th Living Wage accredited company McKean Developments Ltd, a small business based in Barrhead where staff will now receive the Living Wage rate of £7.85 per hour.