Virgin Trains also announced today a £16m contract to refurbish engines for its High Speed Trains, which are serviced and maintained at its Edinburgh depot. 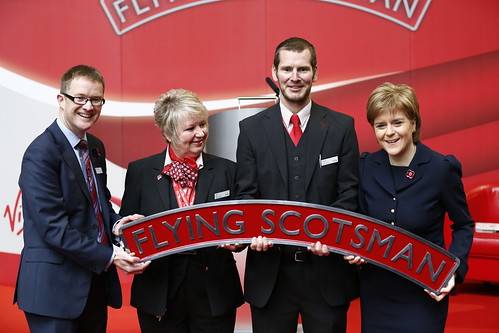 For over 150 years the Flying Scotsman service has connected Edinburgh and London by the historic East Coast rail route. It is wonderful to see the name of the Flying Scotsman train kept alive on the route with a new, contemporary design.
I am also delighted that the refurbishment of Virgin’s diesel engines will draw on the local skills and talents of the Craigentinny workforce.”

Flying Scotsman trains brought style to the railways for many years. Our new train is a design twist on the legendary Flying Scotsman, recreating the glamour of rail travel for the 21st century, using our distinctive Virgin brand and style.

This new engine replacement programme will ensure the continued strong performance of Virgin Trains’ High Speed Train fleet until the introduction of new Super Express Trains from 2018.  We are pleased that the work to install the engines, which will also be in Virgin red, will take place in Edinburgh. We continue to play a key role in the economy of the Capital and Scotland as a whole, where more than 700 of our workforce are based.”

The Red Hot Chilli Pipers were on hand to help with the celebrations – a definite crowd pleaser.