First Minister Nicola Sturgeon visited Glasgow Central Mosque to observe the Europe-wide minute’s silence in memory of those killed in the terrorist attacks in Paris. 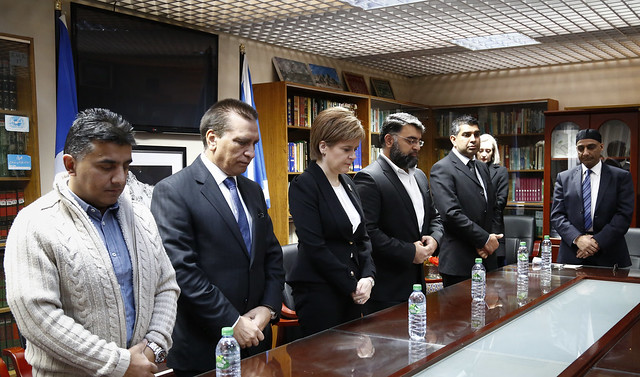 After the mark of respect, the First Minister, Justice Secretary Michael Matheson and External Affairs Minister Humza Yousaf spoke to leaders from the Mosque about how communities across Scotland can come together in solidarity against the scourge of terrorism.

The minute silence observed in Scotland and across Europe is a clear indication that we all stand in solidarity with France and are thinking of that proud nation at this moment.

We continue to send our thoughts and prayers to the people of France and all those affected.”

Throughout the weekend Ms Sturgeon chaired the Scottish Government resilience (SGORR) meetings to discuss the on-going response to Friday night’s attacks. She also participated in the UK Government’s Cobra briefings.

The thoughts and prayers of Scotland are with the people of France tonight. #solidaritywithparis

On Saturday afternoon, the First Minister visited the French Consulate in Edinburgh to sign the book of condolence, which was also signed by many members of the public who expressed their shock and sympathy with France.

FM @NicolaSturgeon has visited @cgfEdimbourg to sign the Book of Condolence and express Scotland's solidarity with France. #Paris

Deputy First Minister John Swinney attended a special service to pay tribute to the victims of the Paris attacks at St Giles’ Cathedral in Edinburgh with the Consul General of France, Emmanuel Cocher.