First Minister Nicola Sturgeon chaired a summit in Edinburgh on Scotland’s response to the unfolding humanitarian tragedy in southern Europe.

The First Minister brought together representatives from the refugee community, third sector, local authorities, religious and political leaders, and other representatives of civic Scotland, to discuss the crisis and set out what Scotland can do to help. 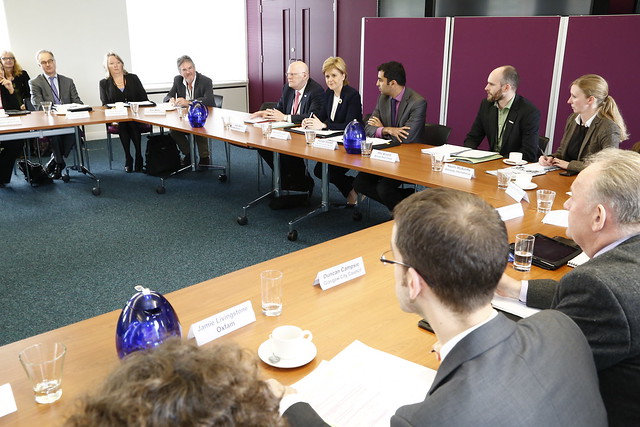 In a speech welcoming attendees to the conference, Ms Sturgeon said:

As an EU member state, we have a duty – as well as a moral and humanitarian obligation – to face up to our responsibilities and accept a fair and proportionate share of refugees.”

Listen to the full speech here

Ms Sturgeon then heard first-hand accounts of fleeing conflict and persecution from the refugee community.

Amal, Munir & Abdul from Somalia, Syria & Afghanistan say they have been made welcome in Scotland pic.twitter.com/abxrcnLJHD

Encouraging meeting with @ScotGovFM @NicolaSturgeon on how Scotland can enhance + make real our commitment to help refugees. @OxfamScotland

After the summit, the First Minister announced that an operational task force would be set up to examine capacity in a range of services in Scotland, including housing, health and social services. The task force will also play an important role in bringing together the many expressions of goodwill and offers of help from communities across Scotland. An initial #1 million to support the taskforce will be made available.

The First Minister strongly expressed her conviction in taking action on the refugee crisis in First Minister’s Questions this week:

“We must respond as human beings. We simply cannot walk by on the other side of that little boy that we all were so touched by…we cannot, must not, have that on our consciences”

On September 3, the First Minister wrote to the Prime Minister urging him to sign up to the EU proposals on relocation and refugee resettlement and allow the UK to take its fair share of people fleeing persecution and conflict. You can read the letter here.