The First Minister carried out a series of engagements in Dublin on the first day of her visit to Ireland.

On arrival the First Minister visited the Scottish Government’s Innovation and Investment Hub.

The @scothubireland team in Dublin working on high-value economic, academic and innovation partnerships between Scotland and Ireland pic.twitter.com/NeOKieUn9s

Scottish exports to Ireland are worth £1.125 billion, and Irish investment into Scotland currently supports more than 6000 jobs.

Our hub is working on a range of issues including economic development, strengthening links on research and innovation, cooperation on energy and the development of renewable technologies and supporting government to government links.

During my visit to Ireland, I look forward to further developing these areas of common interest to ensure deeper collaboration between our governments to deliver greater economic prosperity for both countries.”

Following on from his visit to Scotland in June, the First Minister met the Irish President Michael D. Higgins to discuss continued co-operation between Scotland and Ireland.

Women for Election, an organisation that aims to increase women’s representation in Irish politics, held a round table discussion hosted by Deputy Prime Minister Frances Fitzgerald to discuss what lessons could be learnt between the two countries to promote more women in public life, and the First Minister answered questions on subjects from Brexit to gender equality in politics.

Our event with First Minister of Scotland @NicolaSturgeon & An Tánaiste Frances Fitzgerald is underway! #womeninleadership pic.twitter.com/ZK4GI26xpJ

Today’s meeting was very positive and builds on the strong links between Scotland and Ireland. We discussed a range of issues including economic cooperation, employability, social welfare and innovation. This follows on from a constructive meeting with the Taoiseach at British Irish Council last week.

Following the Brexit vote, the Scottish – Irish relationship is more important than ever and today was an opportunity to strengthen our economic, political and cultural ties.”

At the end of the day The First Minister received the Gold Medal of Honorary Patronage from the Philosophical Society at Trinity College, Dublin. After a lively discussion with students at the Society, she said:

Scotland and Ireland have a long tradition of collaboration in higher education and I look forward to working together to strength these ties even further.” 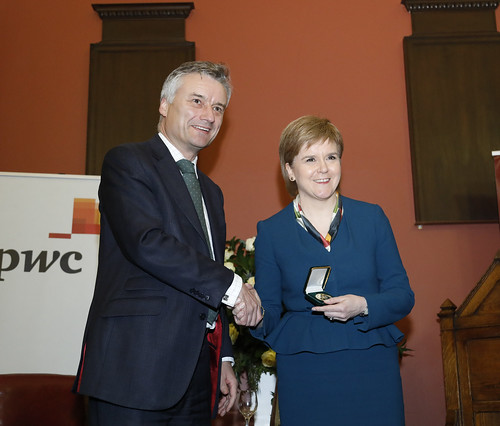