A week ahead of the new Domestic Abuse Act coming into force, FM @NicolaSturgeon and Justice Secretary @HumzaYousaf visited @scotwomensaid to see training materials and hear how staff are preparing for the new legislation: https://t.co/qiQG8wrr6s pic.twitter.com/dN9cuATYKW

The Act creates a new offence of domestic abuse which covers psychological harm as well as physical harm.

They met survivors of domestic abuse who have been helped by Glasgow East Women’s Aid. They also met staff and saw training materials that have been developed by the service with £166,000 of Scottish Government funding. 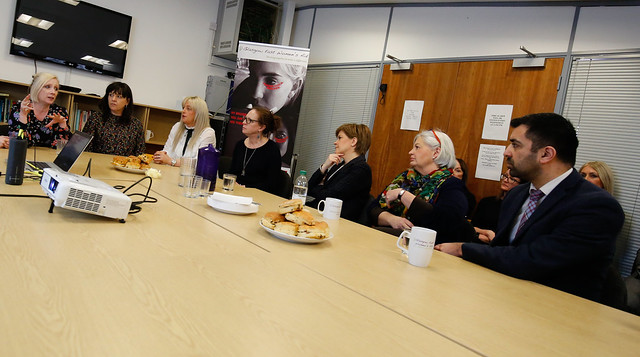 Scotland is leading the way with this new legislation. It will be a landmark moment in our efforts to tackle domestic abuse, including coercive and controlling behaviour, and will strengthen the power of police and prosecutors.

“Coercive and controlling behaviour can have a devastating and long-lasting impact on survivors. It is a form of abuse that is often hidden, but can rob victims of their confidence, self-esteem and safety. Organisations like Scottish Women’s Aid do vital work supporting victims, and the new training materials they’ve developed will help them provide even more support to victims of all forms of domestic abuse.”