The First Minister started the final day of her China and Hong Kong visit with a breakfast interview with CNBC Asia; she is pictured with host Susan Li behind the scenes at the TV studio:

Ms Sturgeon then travelled to the Hong Kong Foreign Correspondents’ Club where she spoke about Scotland’s international profile following the referendum as well as her experiences in China and Hong Kong:

…one of the things I’ve noticed here in Hong Kong – and throughout China earlier in the week – is how aware people are of Scotland’s capability and potential. That’s actually in part another consequence of last year’s vote – we now have a higher international profile than perhaps ever, but certainly for decades. People around the world know that in addition to our history and our scenery, our whisky and golf, we have talented people, world-class universities, extraordinary natural resources and real strengths in some of the key economic sectors of the future.”

You can read the full speech to the Hong Kong Foreign Correspondents’ Club here.

FM @NicolaSturgeon speaking about the "sea change in Scottish politics" at the @fcchk in Hong Kong this morning. pic.twitter.com/8FKtaSJZTL

Later that day she spoke on the impact of women leaders and took part in a panel discussion with Hong Kong academics, politicians and industry leaders at the British Council. 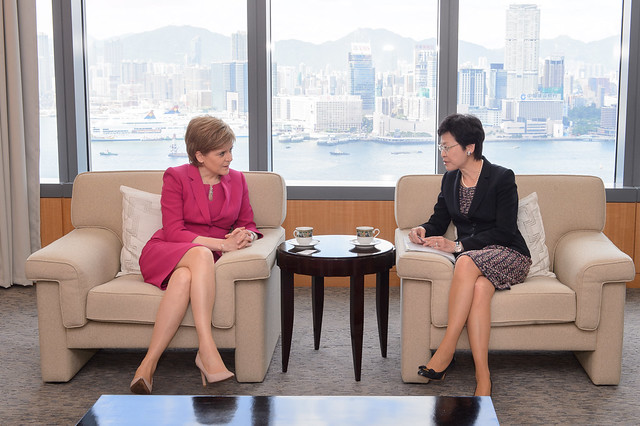 She finished the day, and her China and Hong Kong trade mission, by meeting Carrie Lam, the Chief Secretary for Administration of Hong Kong Government. During the talks (pictured above) they discussed opportunities for economic collaboration between Hong Kong and Scotland as well as Hong Kong’s process of constitutional reform.

The Chief Secretary and I also had a detailed discussion on Hong Kong’s progress toward universal suffrage and democratic reform and the importance of building and retaining public trust as part of any reform process. Today’s meetings have enabled me to bring the historic ties between Hong Kong and Scotland up to date and to put the focus firmly on the opportunity for economic collaboration in the future.”