The First Minister regularly holds Cabinet meetings in different parts of Scotland to give people a chance to raise issues directly with her.

Travelling around the country, the First Minister and her team carry out visits in the area before Cabinet to meet people and find out more about local issues.  In the evening a public discussion is held, where local people are invited to give their views and quiz the Cabinet.

The first Cabinet for 2015 was held in January in Dumfries and was followed by Aberdeen in February. The third was held in Alloa on March 2, 2015.

The FM started her day in Alloa by visiting the home of Craig and Jude Deacons, and their family, to announce £70 million investment in a scheme to help eligible first-time buyers on low to moderate incomes buy a home. 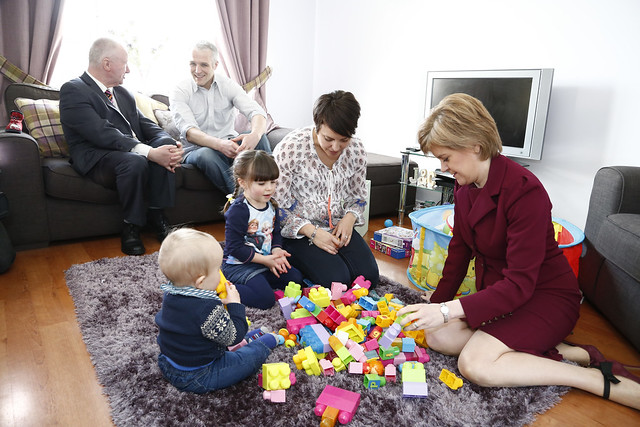 “We want to help today’s generation of young people to access home ownership where this is sensible and sustainable for them.

“We will do all we can, within our powers and our resources, to help people like Craig and Jude get a foot onto the housing ladder”

“Craig and I are grateful for the scheme as it has allowed us to secure a great first home fit for our family life.”

“As both of us were first time buyers the OMSE scheme allowed us to purchase a house fit for purpose to accommodate our two children. “

The First Minster then moved on to Williams Bros. Brewery, a local company with big plans to break into the lucrative Far East and other overseas export markets.

Accompanied by Cabinet Secretary for Food and Drink, Richard Lochhead, she toured the company’s Alloa plant where its craft beers, including Caesar Augustus, March of the Penguins and Good Times, are brewed and bottled.

“Williams Bros. are a genuine Scottish success story and recent years have seen a real growth in the company and heightened brand recognition.”

“Scottish food and drink products are renowned round the world and an expansion into new markets is a real opportunity that could hugely enhance Williams’ business. The wider Scottish economy would also benefit from the increased income through exports.”

She then met volunteers at the Gate Foodbank in Alloa to highlight Scottish Government support for those being hit hard by the welfare reforms.

The foodbank provided food for over 35,000 meals last year, an increase of over 60 per cent on 2013, made possible with support from volunteers and Scottish Government funding of £9,590 over this year and next.

“The number of people experiencing food poverty in Scotland is simply unacceptable, with Trussell Trust data showing use of food banks in Scotland more than doubled in the last year.

“Alloa’s Gate Foodbank is making a huge difference to the lives of vulnerable people with a significant increase in the number of meals provided or delivered last year.”

Other members of the Cabinet were also out and about in Alloa and its surrounding area, carrying out 16 events throughout the day.

Cabinet
That afternoon the First Minister chaired a meeting of her Cabinet in the Alloa Campus of the Forth Valley College. 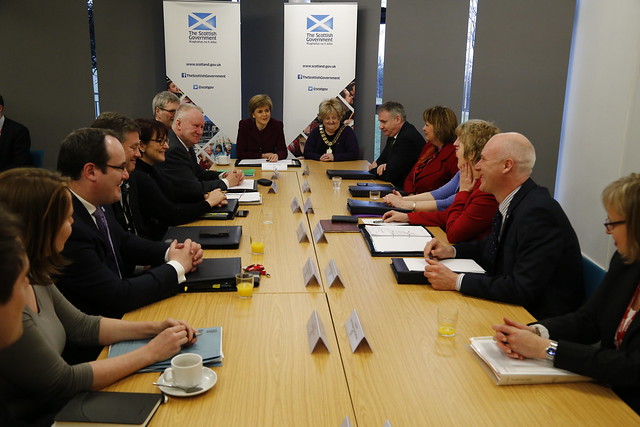 Public discussion
The venue for the public discussion was Alloa Ludgate Church and was attended by over 200 people. The First Minister gave an opening address on creating a more equal and prosperous Scotland, and her team took questions on, amongst other local issues, gender balance, early years support, further education, the economy, energy policy and health inequalities.

You can watch the full session here: