Home » News » Boosting the economy » Beyond the Budget

The First Minister travelled to London to deliver a major speech at the London School of Economics. 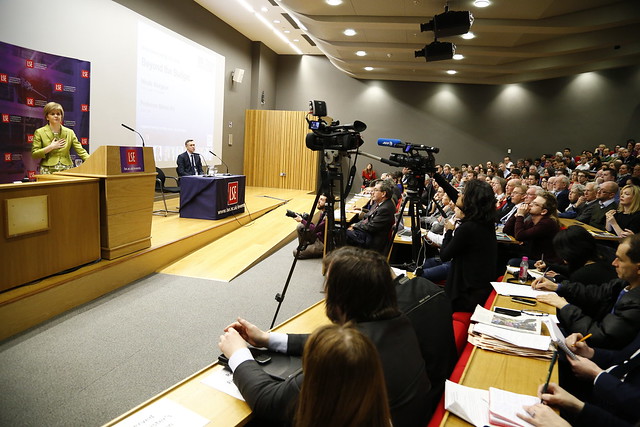 The speech explained how modernisation of the Westminster budget process could help improve decision making by politicians.

The First Minister pointed to the process in Scotland, which increases scrutiny of the budget bill and sees more consultation with opposition parties and other stakeholders.
Ms Sturgeon said this system, which makes coalition governments or minority administrations more likely, improves budgetary decision making as ministers have to build consensus and compromise over spending priorities.

She pointed out that the procedure increases debate on complex issues and ensures the budget’s impact was fully thought through.

The First Minister said that her experience of minority government highlighted how this process worked in practice.

When we were in a minority, we could only win votes by winning arguments. Sometimes we had to compromise. That process can – and often did – lead to better budgets. It involved a process of building consensus across a whole parliament – not just forcing decisions through using the party whip.
“The Scottish system lends itself to that, because there is time for negotiation to take place and Parliament can see and scrutinise the compromises which are made between the draft budget and the Budget Bill.”

FM @NicolaSturgeon speaks to @BBCNormanS after her speech at the London School of Economics. #LSEScotland pic.twitter.com/Ce9SmQZvHa

Read the full text of the First Minister’s speech.