Home » About » Appointment and Role

The First Minister is a member of the Scottish Parliament (MSP) and is appointed by royal warrant from the Monarch following a vote by MSPs to nominate the individual.

Since devolution in 1999, the leader of the political party with the largest number of MSPs elected to the Parliament (Holyrood) has been appointed First Minister.

Taking oath of office at the Court of Session

Having been endorsed by parliament and received the royal warrant, the First Minister must take the oath of office (be ‘sworn in’) at the Court of Session in Edinburgh in front of the Lord President and other senior judges. 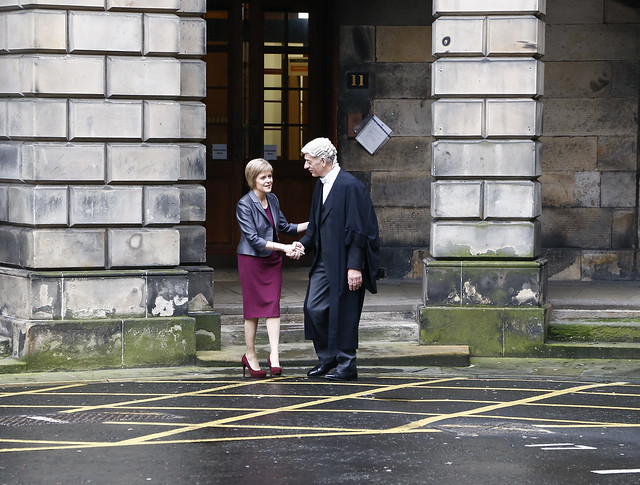 The short ceremony also confirms the First Minister as ‘Keeper of the Scottish Seal’ – an ex-officio and largely ceremonial title that was previously held by secretaries of state for Scotland but conferred on first ministers since devolution. The Scottish Seal (formerly known as the ‘Great Seal of Scotland’ first used by Duncan II in 1094) is the two-plate metal mould used to create the wax seal conferring Crown approval for official documents.

As head of the Scottish Government, the First Minister is responsible for the overall development, implementation and presentation of the administration’s policies and for promoting and representing Scotland at home and overseas.

Subject to Parliament’s agreement, the First Minister appoints other ministers – including a Deputy First Minister and cabinet secretaries who sit in cabinet – from among MSPs.

First Minister and her Cabinet, pictured May 2016

The First Minister chairs the Scottish Cabinet, the main forum for ministers to consider and make key decisions on the strategic priorities and policies of the government to achieve its objectives. The First Minister – also following the agreement of the Parliament – recommends to the Monarch the appointment of the Lord Advocate and Solicitor General (the ‘law officers’), who are also members of the Scottish Government and, together with cabinet secretaries and junior ministers are collectively known as the ‘Scottish ministers’.

The First Minister is also responsible for nominating judges for appointment by the Monarch, including the Lord President of the Court of Session and Lord Justice Clerk, following the recommendation of the Judicial Appointments Board for Scotland.