A world leader in education 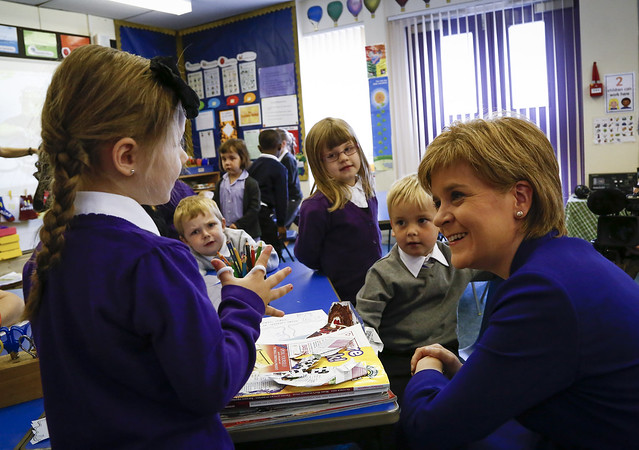 She chatted to Primary 1 schoolchildren on their first day of term in Clovenstone Primary School, before delivering a speech at the Wester Hailes Education Centre, where she made it clear that ‘what matters is what works’ and set out a fresh approach to ensure that every one of Scotland’s children has an equal chance to succeed in their school education.

In her speech, she set out the considerable successes of Scottish education over the last eight years, her twin priorities of improving attainment for all children and tackling the attainment gap between children in deprived and better off areas. She also highlighted the importance of measuring progress and setting high standards for all schools.

“My aim – to put it bluntly – is to close the attainment gap completely. It will not be done overnight – I accept that. But it must be done. After all, its existence is more than just an economic and social challenge for us all. It is a moral challenge. Indeed, I would argue that it goes to the very heart of who we are and how we see ourselves as a nation.”

The full speech is available here:

You can read the full speech here

The First Minister announced that a further 57 schools are to receive funding from the £100 million Attainment Scotland Fund to improve literacy, numeracy and health and wellbeing for primary school pupils – Clovenstone Primary School is one of the schools. This will take the total number of primary schools benefitting from the Fund to more than 300.

Read more about the launch of the Attainment Scotland Fund here.

The First Minister also indicated further announcements to come from the Scottish Government on how educational progress is measured and supported across Scotland that she will announce in Parliament when she sets out her Programme for Government on September 1.

Some of the Twitter stream about the Attainment Scotland Fund and Read, Write, Count  launch are available here: