The party's started and first up its our @ScotGovFM followed by @BrandonLewis @llosa_gonzalo and @COSLA President @Alison2812 Great to have so many Syrian New Scots with us in the room as well as the council staff who made it happen #RefugeesWelcome pic.twitter.com/jrxPqreGqW

“I want to thank all those who have provided a warm welcome… and the biggest thank you is to those families from Syria living with us here…You help make #Scotland a better place." @NicolaSturgeon on the day the 2000th refugee is resettled to Scotland ????????? pic.twitter.com/vLa6Il7c9v

Scottish councils have met their goal to resettle 10% of refugees brought to the UK, just two years into the five-year Syrian Resettlement Programme.

The First Minister met a family who arrived in Scotland in 2015 and were resettled in Edinburgh. 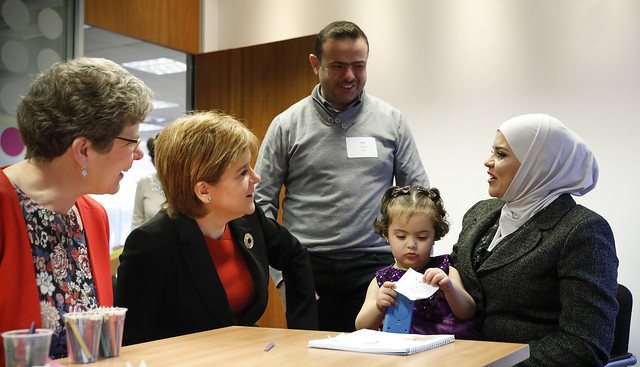 Scotland is an open and welcoming country and today’s celebration, welcoming the 2,000th Syrian refugee to our country, is testament to that. In 2015 I made a commitment that we would take our fair share of Syrian refugees coming to the UK and the hard work and dedication of local authorities across Scotland has meant we have more than met that pledge.

“I am proud that Scotland has welcomed so many refugees fleeing persecution and war into our communities so they can rebuild their lives here.”